We have now lost the last surviving member of what most fans and scholars would consider the three most influential bands in bluegrass music, though Ralph himself may not agree, since he thought of his music as “old time mountain music.”  He and his brother Carter, who began performing as The Stanley Brothers in 1946, developed a style of music that had a distinct sound when compared to the music of Bill Monroe or Flatt and Scruggs.  Ralph’s mountain tenor and biting archtop banjo sound were largely responsible for that distinction.  After Carter’s death Ralph continued on as the front man with the Clinch Mountain Boys and forged his own musical identity.

Ralph said that his favorite banjo player was Earl Scruggs and early on he tried to mimic Earl’s sound to some degree.  But Ralph learned to play a lot of the melody by leading rolls with his index finger in contrast to Earl’s typical thumb lead, and Ralph predominately used the forward roll.  As he continued to develop his style over the years, it seems to me that he started adding more of a modal and bluesy sound to his banjo playing, reflecting his mountain roots even more.  He also would often play banjo in the clawhammer style as his mother taught him, and his songs like Rocky Island and Little Birdie were always favorites of mine.

Ralph was born in an area called Big Spraddle near McClure in Southwest Virginia.  This is coal mining country and is roughly 20 miles from where my own parents were born and raised.  My dad in particular became a big Stanley Brothers fan as a result and followed and supported their music.  Eventually my parents moved to Florida where I was born and Ralph Stanley’s was to become one of (if not the first) banjo that I heard through the records that my dad played.  In 1959 the band had moved to Florida and performed on TV and radio with the sponsorship of Jim Walter Homes.  In fact, I grew up in a Jim Walter home.  So threads of Ralph’s music really have really been woven throughout my life for a long time.

I remember seeing Ralph and the Clinch Mountain Boys do some live shows in the southwest Virginia area in very small venues where he was obviously very comfortable and having a good time with the audience.  And in one of the most surreal moments of my life, I sat next to Ralph during a banjo workshop at MerleFest 2014 when he announced that he would be cancelling his already-announced retirement. And then the assembled players onstage all played a round of his own Clinch Mountain Backstep in his honor.  I will never forget that moment.  You can see YouTube video of all of this here. Players onstage, left to right:  Blake Williams, Scott Anderson, Ralph Stanley, Pete Wernick, and Mike Munford.

When I heard he had passed away, I had already planned to be in the area for a family reunion, and I was able to stay a few days longer to attend his public memorial service.  The service was held high up on Smith Ridge at the festival grounds for Ralph’s Hills of Home Bluegrass festival, and I had the feeling that was just as he would have wanted it.  In spite of the decades of travel which may have been easier from some other location, Ralph lived almost his whole life within just a few miles of this place and he loved it dearly.  It is a beautiful and peaceful place.

Hundreds of fans and friends came to pay their respects to Ralph, and reporters from print media and TV stations were there to cover the event as well.  Many former Clinch Mountain Boys were there, including John Rigsby who sang a great a capella song during the service.  Pastor Eva Murphy spoke at length of Ralph’s love for his family, friends and fans as did Ralph’s granddaughter Amber Stanley.  Ralph’s friend the Rev. Frank Newsome spoke, preached, and powerfully sang hymns in the traditional shape note style. Jim Lauderdale spoke of his love and admiration for Ralph, followed by former Clinch Mountain Boy Larry Sparks who also offered a song with Judy and Dan Marshall.  Another former Clinch Mountain Boy Ricky Skaggs then talked fondly of Ralph and reminded everyone that he is now in a better place before he sang City That Lies Foursquare.  Patty Loveless and Vince Gill spoke a few words also before they sang with Skaggs the most beautiful version of Vince’s song Go Rest High on That Mountain that I have ever heard.  You can see the video of that here.  Of course, before, during, and after the service the music of Ralph and the Stanley Brothers was featured often.  And that music really just seems to naturally emanate from the surrounding hills.

A short graveside service followed including a twenty-one gun salute for Ralph who was a U.S. Army veteran.  And then Ralph was laid to rest among family right there in his hills of home. 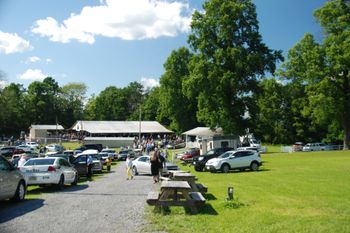 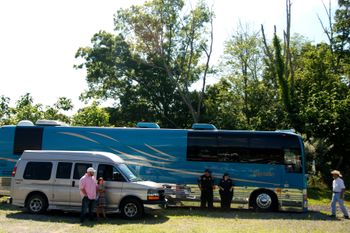 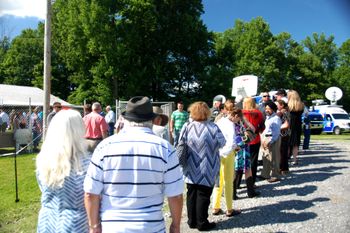 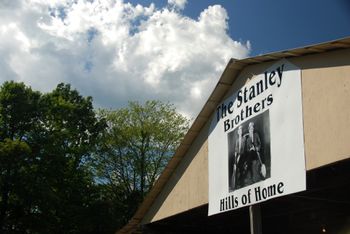 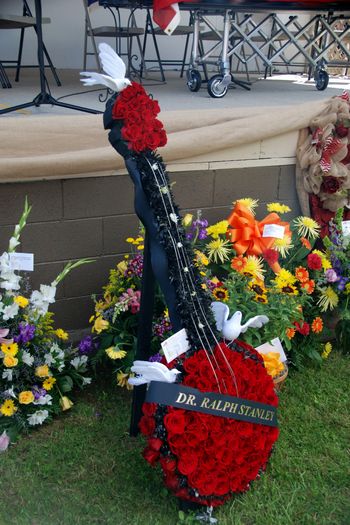 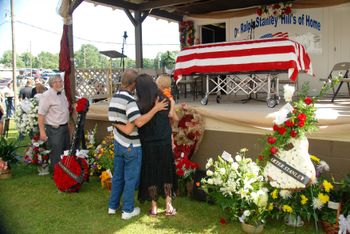 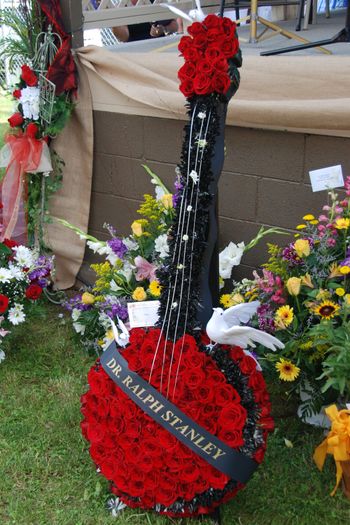 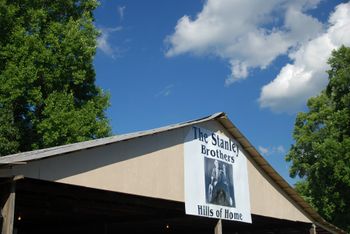 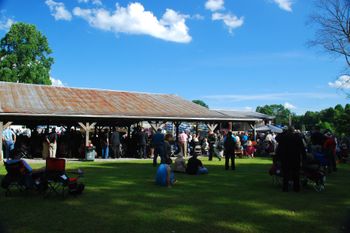 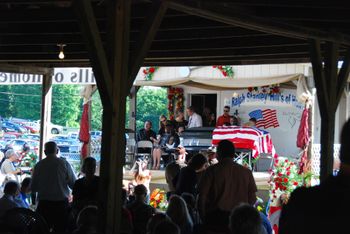 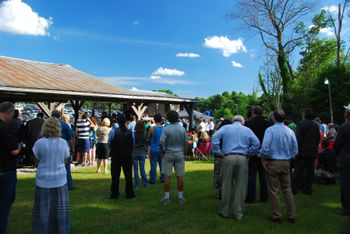 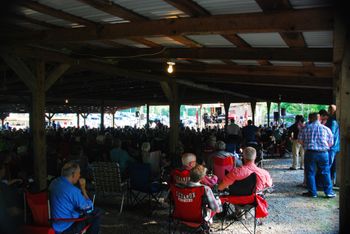 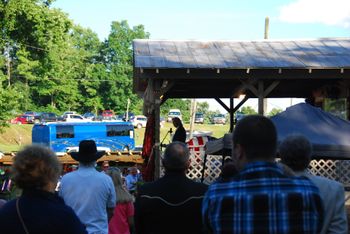 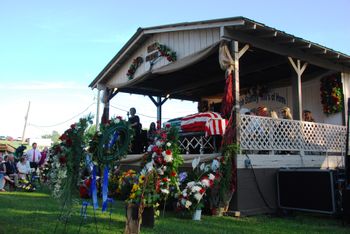 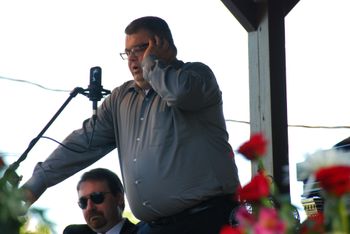 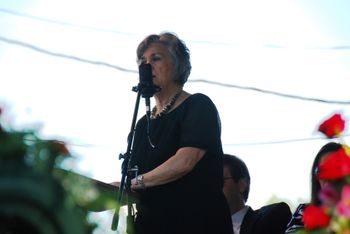 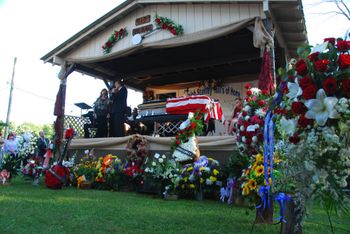 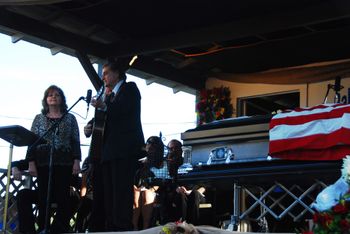 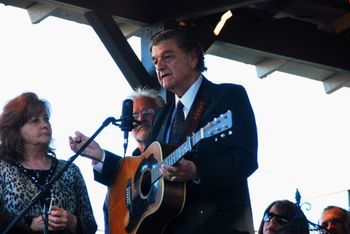 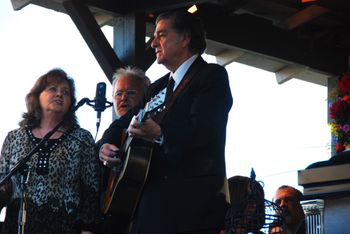 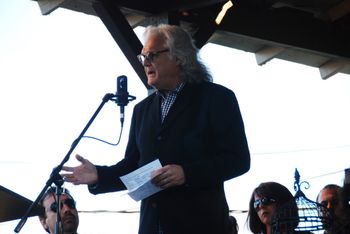 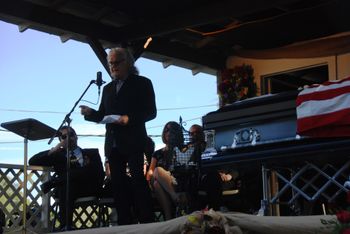 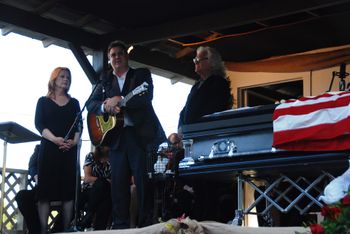 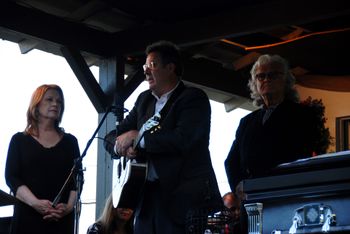 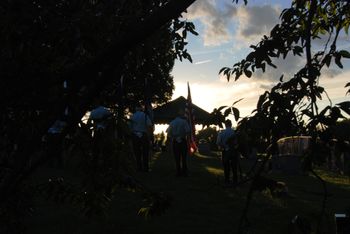 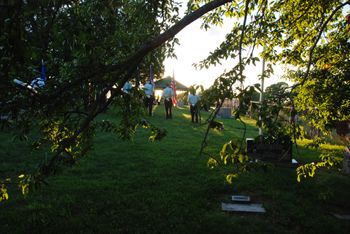 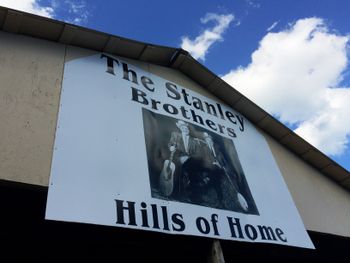