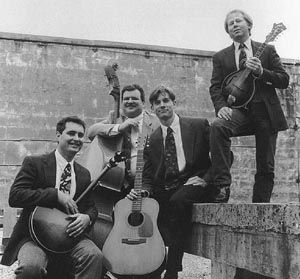 “A third generation bluegrass band to be around for a long time...Keep it up, guys!!!”
Larry Rice

Endless Highway played a unique style of driving, traditionally-oriented bluegrass, performing in front of enthusiastic crowds at the Withlacoochee Bluegrass Jamboree, the Florida Folk Festival, and the Wings and Strings Festival among many others. Endless Highway was the winner of the 1994 local Pizza Hut Bluegrass Showdown and then travelled to Hattiesburg, Mississippi to compete in the Southeast Regional Showdown where they finished second. These appearances soon led to an affiliation with Mid-Knight Records and the release of their debut recording in 1996. A Showcase spot at the IBMA convention in Owensboro, Kentucky soon followed.

Greg Turner-mandolin. Greg grew up with bluegrass through his father's gospel band and started playing as a young teenager by learning from tapes of his father's mandolin lessons with Larry Rice. His playing matured during his 9 years of travelling with the Bluegrass Parlor Band and occasionally with other bands in the Bradenton area, and later with Valla-Turner-Williamson. He was well-known for the incredible tone and taste in his playing and was widely regarded as the best mandolinist in Florida and one of the best in the country.  Greg passed away far too soon on November 9, 2013.  We miss him.

Scott Anderson-banjo and lead, tenor, and baritone vocals. Scott began his musical career with the contemporary and Southern gospel of First Light, then played the traditional bluegrass sound of Tom Henderson's Bluegrass Parlor Band, followed by the driving grungegrass of Endless Highway , and the sweet gospel of Gentle River.  Following the critical success of his first solo project Rivers, stints as banjoist and vocalist withThe Jim Hurst Band and Keith Sewell, and a breakthrough CD project with his daughter Amanda on Another Day, Scott brought these influences together into the powerful acoustic sound and beautiful family harmony of the Amanda and Scott Anderson Band.  With an All-Star cast Scott dredged up a swampy soup of originals and favorites on his latest project, Tales from the Swamp. Scott has also performed or recorded with Claire Lynch, Sam Bush, Vassar Clements, Larry Rice, Byron Berline, Adam Steffey, Sierra Hull, Clay Hess, Chubby Wise, Allen Shadd, and Chief Jim Billie, and the Naples Philharmonic Orchestra (yes, with a banjo!)  Scott has been featured in Banjo Newsletter, and writes for the magazine as well, including articles and interviews with Tony Trischka, Bill Evans, Barry Abernathy, Greg Cahill, Scott Vestal, Cory Walker and Béla Fleck. Scott is also a teaching mainstay at the Suwannee Banjo Camp every spring.

Gabe Valla-guitar and lead and baritone vocals. Gabe won the 1992 Merle Watson Memorial flatpicking championship after playing guitar for only 2 years. As would many bluegrass guitarists, he credits Tony Rice with being his biggest influence. Gabe has used that foundation to develop his own style and his playing is some of the more original that you will hear. He later performed with Valla-Turner-Williamson and Gatorbone. He has recorded on numerous sessions for radio and television and also played on and co-produced Larry Rice's “Notions and Novelties.”

Mike Hyde-bass and lead, baritone, and tenor vocals. Mike began playing bluegrass on guitar in his hometown of Hattiesburg, Mississippi with Sweet Dixie. After his graduation from Southern Mississippi University, his job as a furniture salesman brought him to Gainesville where he met Gabe and later Greg and Scott at festival jam sessions. Within a couple of years he joined Greg and Scott in the Bluegrass Parlor Band as the bass player before co-founding Endless Highway.